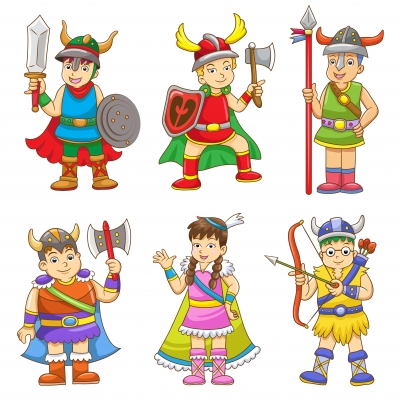 1. This is basically a fun group version of “Rock, Paper, Scissors”

2.  Divide the class into two teams.  Tell the teams to go on either side of “the stage”.

3.  Each team secretly decides if they are going to be Wizards, Giants or Goblins.

4.  They line up on two sides of the room facing each other.

6.  On “3” they take up the position of the character the group has decided on:
• Wizards: lean forward throwing their arms forward as if casting a spell and say “Shazzam”
• Giants: put both hands above their head, stretching up really tall and say “Ho, ho ho!”
• Goblins: crouch down, put their hands up to their face as if scratching their beards and make a high pitch laugh.

8.  The losing team must run back to their side of the room. The winning team try to “tag” as many of the losing team as possible before they get home.

9.  The captives now become part of their captors’ team.

10.  Continue until one team wins.

___
Image courtesy of AKARAKINGDOMS at FreeDigitalPhotos.net