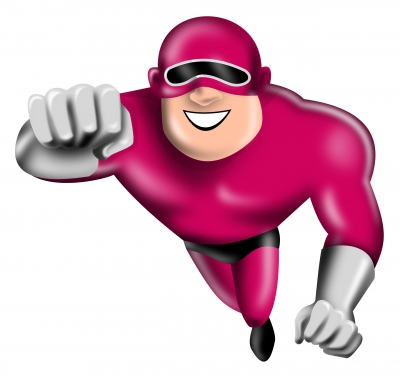 Purpose: This a really fun improv game to play with older students.

1.  Ask 1 player to take center stage, and 3 players to line up offstage.

2.  Ask the audience for a suggestion for a made-up superhero (“Laundry man!”, “Captain Toothbrush!”, “The Invisible Pancake!”, “Princess Talk Too Fast!”, “Dr. Never Smile!” etc.)  The player onstage will take on this character.

4.  The player onstage begins the scene with a monologue, as the superhero, explaining the crisis. (Consider having them turn on the radio or TV to discover the problem.)

5.  When the player says “If only I had some help!” a 2nd player enters. The 1st players endows the 2nd players with a superhero name. (“Thank goodness you’re here, Wink Girl!”).  The 2nd player takes on that character and joins the scene.

6.  After awhile of trying to solve the crisis, a 3rd player enters and the 2nd players endows him/her with a name.

7.  Finally the 4th player enters and the 3rd player endows him/her with a name.

8.  The scene continues until the superheroes find a reason to exit, in opposite order that they arrived.

Check out a version of this game played on “Whose Line Is It Anyway” here.