How to Write a Monologue - Free Lesson Plan from "Teaching Playwriting" 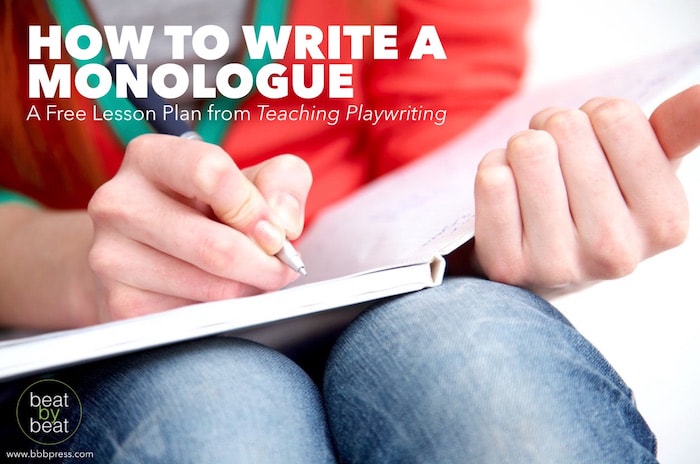 The following lesson plan is an abridged excerpt from the new book Teaching Playwriting: The Essential Handbook, a step-by-step guide to fostering creativity in your classroom. You can learn more and instantly download the entire 108-page resource by clicking here.

The first step to becoming a great playwright is the ability to step inside a character and find his or her voice. Monologue writing is a great way to practice that skill.

The interactive activities below will help you provide your students with the tools necessary to create a compelling monologue that rings true to their characters.

Warm-Up: Talk for a Minute

Have students pair up for this activity. One student is “A” and the other is “B”. Each student has one minute to speak on a given topic. Their mission is to stay on topic to the best of their ability and to talk for the entire sixty seconds without stopping.

If A goes first, B’s job is to listen and keep track of A’s speech habits. Does A pause a lot? Use “ums” and “ahs” repeatedly? Are there words she repeats more than others?

Once the minute is up, it is now B’s turn to speak on a different topic and A’s turn to listen and pay attention to B’s habits.

After the second minute is up and both partners have spoken, open a discussion up on what students noticed about their experience when speaking to and observing their partner. Was this a hard/easy activity? Why? Were they able to stay on topic?

Speaking as a Character

Tell them that they are going to do this exercise once more, but this time, they will speak in the voice of a given character. To prompt them, you will provide part of their first sentence. This time B will start and the character they must voice is either a king or a queen. Write on the board the beginning of their first line and give them one minute to speak.

Example: As king/queen of this great nation of ours and all its people, I feel it is my duty to discuss…

You can either give them the topic or let them choose. After the minute is up, it’s A’s turn again. Give them a completely different character. Here’s a possible first line prompt:

Example: So I said to her, “I may be a slow-witted giant with a nasally voice, but there isn’t a thing I don’t know about…”

If they are able to stay on task without laughing, kudos to them!

Once again, discuss the experience as a class. Was it harder speaking as a character as opposed to speaking as themselves? Easier? Why? Did their use of language change when speaking as royalty or a slow-witted giant? How? How could this activity help us when writing for our characters?

Ask students, “How many people speak in a dialogue?”

Vocabulary: Dialogue – A conversation between two people or more.

Once correctly answered, move on to “How many people do you think speak in a monologue?”

Vocabulary: Monologue – A speech made by one actor.

They’ve already spoken two monologues today, but now they will write a monologue for a character. The character can be one they developed from any of the Creating Character lessons or be wholly original. However, only characters with a completed The Eight W’s of Character Development worksheet (worksheet D) should be considered so that there’s biographical information already in place.

Ask students what they learned about the character or situation from this monologue. They will most likely suggest that the woman is young because of the use of “mad crazy” and they may suggest that she won the lottery. Ask them if they know the latter for a fact. Generally speaking, they may guess about the situation, but there are not many concrete facts offered in Monologue A. All we really know is that a woman now has some money and that she may be young. Next read the second monologue.

Ask the following questions after the second monologue:

After you have thoroughly reviewed the second monologue with the class, reveal that these two monologues are for the same exact character in the same exact situation. In Monologue A, however, we learn only a little information whereas in Monologue B we are given so much more.

Like the second monologue (B), the third monologue (C) offers a lot of details, but to some extent, it offers too many. Audiences like to feel smart in figuring some stuff out on their own, so try not to spoon-feed every detail to them.

Before they start writing, review with the class the difference between outer and inner monologues. Take a moment to go over the differences, perhaps providing a brief example.

Outer Monologue: When the character speaks directly to somebody and that other person is aware of being spoken to.

Inner Monologue: When the character speaks his/her thoughts out loud either to the audience or themself.

While it might be interesting to have a character share a random monologue about the time he slipped on a banana or the time he took a trip to New Jersey, remind students to keep their monologue connected to the character’s journey. Carrie Ann’s second monologue is about the moment she realizes she’ll be able to afford her daughter’s operation. A monologue about how she organizes her sock drawer just isn’t relevant. Keep monologues focused. Other words of advice to share with your students:

1) Monologues often happen at heightened and impassioned moments or an important moment during the play or your character’s life.

2) There should be a convincing reason why the character giving an outer monologue does not get interrupted by the person they are speaking to. Again, passion or anger or somebody who really needs to speak from the heart and be heard are useful here.

3) Monologues should reveal something about the character.

4) Keep your monologue present and active, so it’s not a character just telling us about a story they remember.

Give students a moment to review the character that they have created and the corresponding Eight W’s worksheet.

Have students single out a critical moment when their character has something important to say.

…Lucille is in the hospital again and Carrie Ann tells herself that she will stop at nothing to make this a better world for her daughter. (inner monologue)

… Carrie Ann, filled with anger, walks into Frank’s office to give him a piece of her mind and to quit her job. (outer monologue)

Before they write their monologue, have students answer the following three questions at the top of their page:

Question 1: What moment are you writing from your play?

Question 2: Why is this a moment for a monologue?

Question3: Is this an inner or an outer monologue? If outer, who is your character speaking to?

Monologue lengths vary, but if students are writing by hand, I tell them to aim for three quarters of a page single-spaced.

Lastly, remind them to incorporate passion and details, and to use language that is specific to their character.

Give students 7-10 minutes to write and revise.

Have students partner with a neighbor. Student A briefly provides context and pertinent backstory, then reads their monologue to Student B. After A finishes, B comments, mentions details that stood out and asks questions if anything was unclear. Then it is B’s turn.

While this is going on, walk around the room and skim a few monologues that aren’t currently being read aloud to look for potential examples to share with the rest of the class.

Afterwards, ask for volunteers to share their monologue with everybody. If you don’t get any volunteers, read a few monologues that stood out to you while you walked around. But usually, there are volunteers. Before they read, have them provide any pertinent details that are useful for the audience to know.

Reflection: Kings speak differently than giants. And giants speak differently than you. Despite the differences, we can always imagine what it would be like (and sound like) to be somebody we are not. Just as a city kid probably wouldn’t say, “y’all come back now, ya hear” or a grandmother wouldn’t say, “what’s poppin’, yo?” the words we give our characters to speak should be true to that character. And the moment they speak a monologue should be a moment where they have something important to express.

Follow-Up: No piece of art is necessarily perfect the first time through. Have students revise their monologue with a minimum of three changes or additions. At the bottom of the page, ask them to write down the reason why they made each change. Additionally, have them list what happens immediately before and after the monologue. 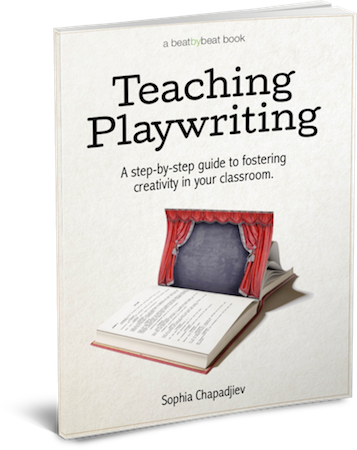 To download 20 additional chapters just like the one above, check out Teaching Playwriting: The Essential Handbook, a 108-page step-by-step guide to teaching playwriting in a classroom setting. Written by Sophia Chapadjiev, Artistic Director of the Young Playwrights Festival at the Eugene O’Neill Theater Center.