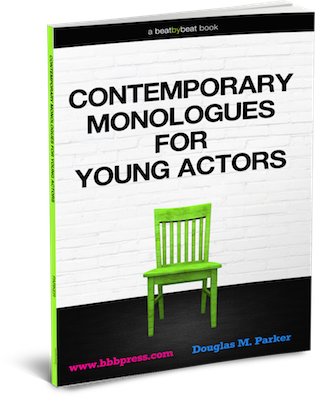 Do you find it hard to find quality monologues for kids and teens? Have you noticed most books on the market seem to be a bit outdated, or a little whiny, or simply…well…not very good?

Contemporary Monologues for Young Actors is a new downloadable eBook that offers 54 original monologues by award-winning New York City playwright Douglas M. Parker. These monologues were created specifically for actors and acting students ages 7-14 and for the teachers, directors and acting coaches who work with them.

(Scroll down to read four FREE monologues from the eBook!)

.
Below are two sample monologues written for “younger” actors:

Some people think I don’t like sharing, but that isn’t true at all. I love sharing. I mean, what’s not to love about being able to go up to someone and say, “Hey, can I have some of that candy?” And then they give you some! Or, “Can I ride your bike for a while?” And then you get to ride their bike! Sharing is awesome. Sometimes you have to be careful, though. Like if someone comes up to me and says, “Can I have one of your cookies?” Well, if I gave them a cookie, then I might not have any cookies left to share with other people and that would be, like, the opposite of sharing. So I have to say no. Because sharing is really important.

Before we moved here, we had this big dog named Scout. Mom always said he was a total mutt, but I think he was also part collie. And maybe part golden retriever. But he was definitely at least half mutt. Scout was supposed to be the whole family’s dog, but he was really mine. I mean, after school, it was me he would be waiting for. And when anyone threw his ball, I’m the one he always brought it back to. And at night, it was always my bed he slept in. But before we moved here, my Mom found out we weren’t allowed to have any pets, so we had to give him away to my cousins. I don’t really talk about it, but sometimes I dream about Scout. He’s got his ball in his mouth and he’s looking for me. And I’m saying, “Here, Scout. I’m right here.” But he doesn’t hear me, and he can’t see me, and I’m saying, “I’m right here. Scout. I’m right here.” And then, I don’t know, I guess I wake up . . . I don’t know if Scout dreams about me.

Below are two sample monologues written for “older” actors:

Hi, my name is Terry Taylor and you should vote for me for class president, because of all the really amazing ideas I have to make all of our lives here at Garfield a better place. Like, OK, for instance, this one idea that I have that there should be a table out in the hallway all the time filled with free cookies and cupcakes and brownies and maybe those amazing frittata bites that they sell at Mr. Chocho’s down on the corner. I mean, if everyone likes frittata bites or even knows what they are. They’re really good. This would improve school morale and also keep everyone’s energy up for better studying.

Another amazing idea I have is to completely get rid of grades, mostly because I think they’re elitist and also because even someone who fails is actually a successful person in their own way. So there’s that.

And finally, I would like to introduce a by-law or something that would make it socially not acceptable for anyone to be called a geek or maybe shoved into a locker or have their lunch money stolen just because they maybe wear glasses or, for instance, are running for class president. So there’s that. Thank you . . . Terry Taylor. Vote for Terry Taylor . . . Thank you.

I saw on the Discovery Channel where a long time ago, before the beginning of time, the entire universe was as small as the head of a pin. And everything was inside it. Stars, planets, houses, people, cars – other pins. Everything in the universe. And then one day, this head of a pin just exploded and everything came out at like a million degrees hot and a million miles an hour. And all the stars and planets and people and cars just kept getting bigger and bigger, until they filled up all of space and all of time, just burning and melting and spinning. And as soon as I heard that, I knew that I was just like that pin, and that one day I’m gonna explode too. And when I do, fire and stars and whole worlds will come out of me and they’ll be a million degrees hot and they’ll travel so far and so fast that I’ll never have to come back here again. Not ever . . . Not ever.

At Beat by Beat, we’re passionate about raising the bar on the quality of resources that are available for young actors…and you’ll find this book to be no exception. Over 30,000 people a month visit the Beat by Beat website, discovering tools and resources which have brought joy to teachers and creativity to young actors around the world.

You have our personal guarantee that if you aren’t completely satisfied, if you don’t love this monologue book and use it all the time, call or email us within 30 days and we’ll refund every penny immediately.

With the purchase of this eBook you’ll receive:

✓  Instant download of a 60-page PDF eBook containing 54 original, high-quality monologues
✓  A broad range of emotions and situations to choose from
✓  Convenient organization from “younger” to “older” as the book progresses
✓  The ability to print and photocopy as much as you need for personal or classroom use
✓  A 30-day no-risk guarantee!

Check out the inside of the eBook – Click here for a PDF preview.

.
Here’s one more free sample from the book:

My Dad doesn’t talk a lot. Usually just stuff like, “I thought I told you to clean your room.” Or, “If you’re not ready in ten minutes, you’re not going.” And even when he does talk, I never really know what to say back. But one time, I walked into the living room and we have this baby picture of me that’s over in the corner and he was just staring at it and staring at it. And I guess I must have made a noise or something, because he looked over at me and he looked at me kind of funny. And he said, “The day you were born was the day I knew I wasn’t the most important person in the world.” And just that one time in the living room, I knew what to say back, and I said, “I love you too.”

“My daughter has always had difficulty finding material for auditions and performance, but I could not have been prouder than when I watched her put the audience in hysterics with not one but two of the monologues from this book. Well-written, inventive, age-appropriate.”

“As a drama teacher, it’s so refreshing to find a monologue book for my students that gives them a chance to express some emotional depth (or to just be genuinely funny). I’ve so often found that material written for kids is just not that interesting or involving. I bought this book to freshen up my library for the upcoming year without really knowing anything about it and am very pleased.”

“I was really thrilled with this book. I am the proud uncle of two aspiring thespians and thought it might help them with audition material. That said, I wasn’t sure if they would be appropriate for young actors so I had it delivered to my apartment to give it a once over. Definitely green lighted. Mr. Parker has a real knack for making these monologues seem not only unique from one another but also seem right for a young adult’s voice. Each also has a certain charmingly wry twist to it that (somewhat akin to David Sedaris’ work) adults too would enjoy. My niece and nephew were really excited to receive this as a gift.”

“Started the school year by giving my class a few selections from Contemporary Monologues. It’s not often that I genuinely laugh at material written for this age group or genuinely get a lump in my throat. It’s so rewarding watching my younger actors perform material that doesn’t “write down” to them.”