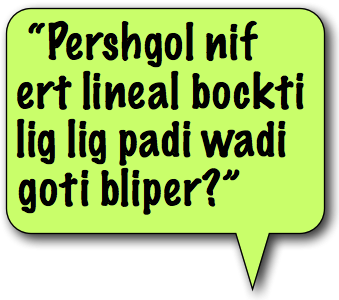 1.  If you haven’t already, introduce your students to the idea of speaking in “Gibberish”. (Gibberish means speaking with silly sounds that don’t mean anything, but still communicate an intention and meaning.)

2.  A good way to warm up the class is with a simple call and response.  Speak a phrase in gibberish, and have the kids repeat it.  Try to use gestures and demonstrate different emotions and styles.

4.  One will speak gibberish, and the other will translate the gibberish into English.

5.  Give the gibberish student a specific situation to talk about, or take suggestions from the class.  (i.e. You have just come back from a walk on Jupiter, and you are telling us, a crowd of reporters, all about it.)

6.  The gibberish speaker should speak only one line at a time, using as much physicality as he/she can.  Then the interpreter will mimic the motions and translate the phrase into English.

–  A scientist explaining her recent discovery of a 2nd moon
–  A pop singer giving a press conference after falling asleep during his concert performance
–  A child describing what it was like getting her first cavity
–  A chef explaining how to cook his favorite meal, candy spaghetti (or anything else!)
–  A farmer explaining how to milk a cow in record time

Do you have other scenario ideas?  Leave them below in the comments!