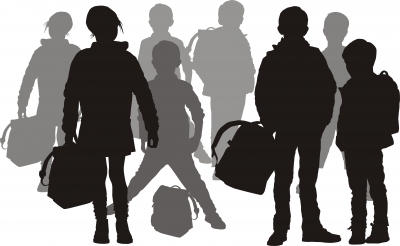 Purpose: This game helps kids practice NOT being the center of attention. It’s about creating an atmosphere, or backdrop, without taking focus. Great for helping kids become part of an ensemble or chorus that supports a scene.

2.  Each group must decide on an environment (i.e. the beach, a doctor’s office, a playground, a bus stop, etc.)

3.  The objective of the group is to create the scene’s environment without any one person being the center of attention. They can use their bodies as props/objects within the scene, use sound effects, become secondary characters, etc.

Player 1: A business person pacing around in the background, checking his/her watch constantly.

Player 3: A taxi driving through.

Player 5: A tourist looking at a map, confused.

All of these things should be done subtly, never overpowering one another.

4.  Give the groups a few minutes to practice, then call each group up to the stage one at a time.

5.  When you say “action!” the background scene should come to life.

6.  Ask the audience if it felt like a scene lacking a main character. If YES, the group accomplished their goal. Was anyone taking too much focus?

7. Allow the groups to adjust and try again until the balance is right.

VARIATION: An alternative is to call this game “Extras”. Every student in the background scene much be an actual character within the environment, but careful not to take focus once the director calls “Action!”.

—
Image courtesy of Vlado at FreeDigitalPhotos.net